Peter Saul has long been famous for his idiosyncratic artistic vision—one characterized by his signature brand of distorted figuration and overtly political subject matter—filtered through his offbeat Pop sensibility, which combines elements of both Surrealism and Abstract Expressionism. 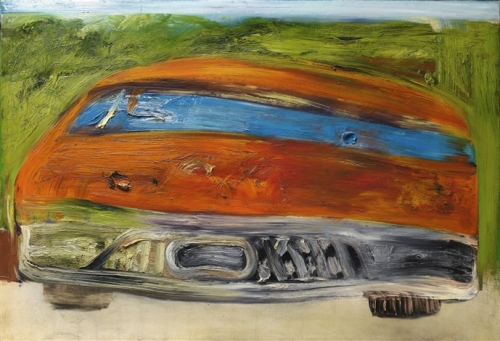 In 1958— two years after leaving art school and three years before his first solo exhibition at Allan Frumkin Gallery—Saul found himself living in Paris with little money and few art-world connections. As Saul recalled to art historian Robert Storr, while in Paris he “painted two large paintings of cars face on.” Executed in a gestural mode reminiscent of Willem de Kooning or fellow Bay-Area artist Richard Diebenkorn, these works already signaled his departure from their influence and his embrace of overtly “American,” popular subjects and themes. “I tried to paint the way people painted in 1958,” Saul remembers. “The first one I painted was a landscape, and then I painted a car and various things.”

Automobile, 1958, is a rare and early example of Saul’s emergent sensibility, one aptly conveyed by the decision to paint the grills, hoods, and windshields of automobiles—objects already deeply imbued with symbolism connected to the open road and rugged individualism. Like many artists of his generation, Saul was also eager to carve his own path (stylistically and thematically): to break with his art school training and to find a novel means of expressing his peculiar vision. Art historian Michael Duncan charts the development of Saul’s early style as “taking off from the organic abstraction of Arshile Gorky and Roberto Matta, and the gestural expressionism of Willem de Kooning,” a development intentionally fashioned “with arrogant insouciance, eager to defy the Ab-Ex edicts of his art school training by flaunting direct references to American trash culture.”

Automobile (and its companion painting from the following year) represent two of Saul’s earliest gestures of artistic independence. By inflecting the gestural abstraction of the 1950s with overt references to American popular culture, Saul started to establish his signature voice. As Saul recalls of these works, “ I didn’t know what to do in Paris, so I decided to compromise my art ideas and to resemble de Kooning as much as possible. I spread medium over canvas before I began. And then I sort of went like this, you know, zig zaggy…” In fact, later in the 1970s, Saul would end up doing his own satirical reinterpretations of de Kooning’s iconic “Woman Series.” 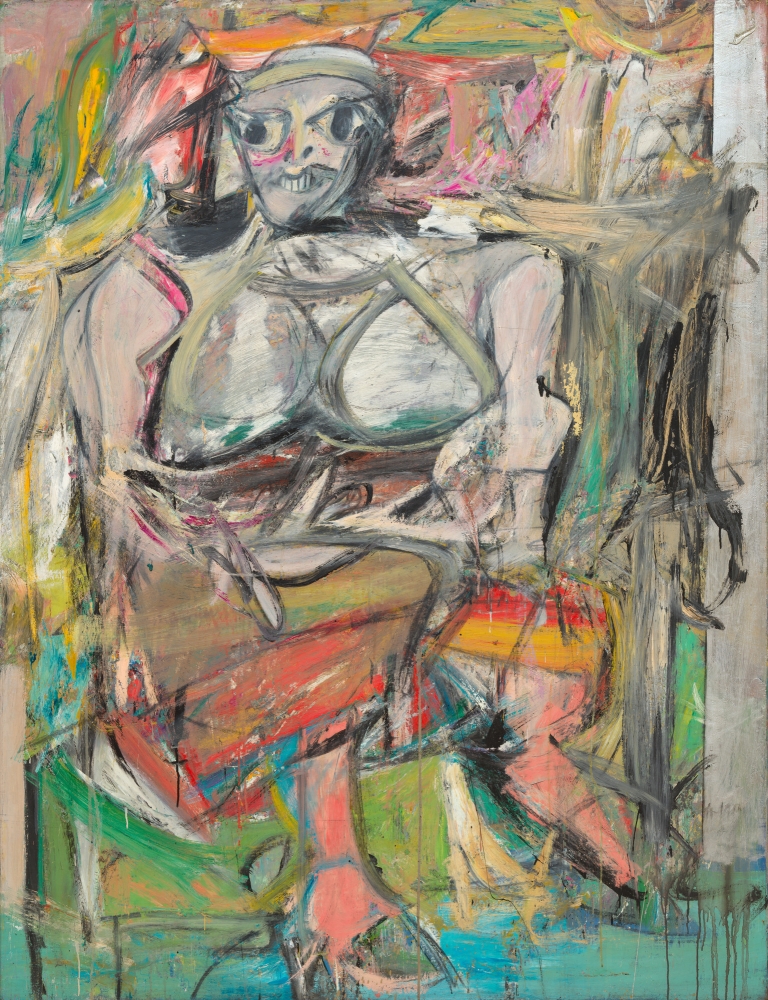 Oil and metallic paint on canvas

In both car paintings, the viewer is confronted directly with palpable masses of painterly gestures and electric colors. The cars are depicted straight on, as if seen speeding headlong towards the viewer. In this way, they recall the dynamism, awkward frontality, and distorted features of de Kooning’s women, except Saul has displaced his painterly impulses onto yet another (though no less distinctive) object of American pseudo-fetishistic fascination: the automobile.

Although characteristic of Saul’s early transitional style, already one notices certain budding tendencies, such as his typical use of low perspective and distorted foreshortening, which makes his subjects appear to be within arm’s reach of the viewer. In both car paintings, though more noticeably in Automobile, Saul places the scene within an indeterminate landscape under a California-blue sky, an iconic stylistic feature which he still utilizes today.

As curator Dan Cameron has noted, part of what makes Saul’s work so appealing is “his unremitting ability to pinpoint those parts of the American psyche that grate hardest on foreigner’s nerves: our brashness, aggression, and lack of finesse.” In both style and subject, Saul’s iconic early painting Automobile intentionally showcases these characteristics and sets the stage for Saul’s subsequent sixty-year painting career.

Saul’s “semi-estranged viewpoint,” as Cameron incisively suggests, “is rooted in his extended artistic sojourn in Europe, from the late-1950s to the mid-1960s, which set in place a lifelong pattern of self-imposed isolation from the outside world.”No object of American fascination better conveys this notion of semi-estrangement than the automobile, which allowed for an unprecedented level of personal freedom, yet at the expense of the Modern individual’s ties to both the land and society.

In Automobile, the steely-blue windshield is rendered blank and anonymous, allowing no view inside the car’s interior. This feeling of  “semi-estrangement” might thus be evoked in the viewers of Saul’s curious automobile, who will find it difficult to imagine themselves behind the wheel. Like American culture broadly considered, this painting conveys a society asleep at the wheel or recklessly unmoored, veering headlong into the future with abandon.

For availability and pricing, or to schedule an appointment, please contact Gilles Heno-Coe at gilles@craigstarr.com.