Craig F. Starr Gallery is pleased to present Notations, a group exhibition including works by John Baldessari, Mel Bochner, Jonathan Borofsky, Heinz Mack, Eleanore Mikus, Robert Morris, Barnett Newman, Georges Noël, Sylvia Plimack Mangold, Edda Renouf, Joel Shapiro, Lenore Tawney, and Cy Twombly. This exhibition, which will be on view by appointment until April 17th, juxtaposes a range of approaches to the idea of “notes” or “notations,” all tracing that fine line where mark-making, the written or printed word, and drawing coexist. 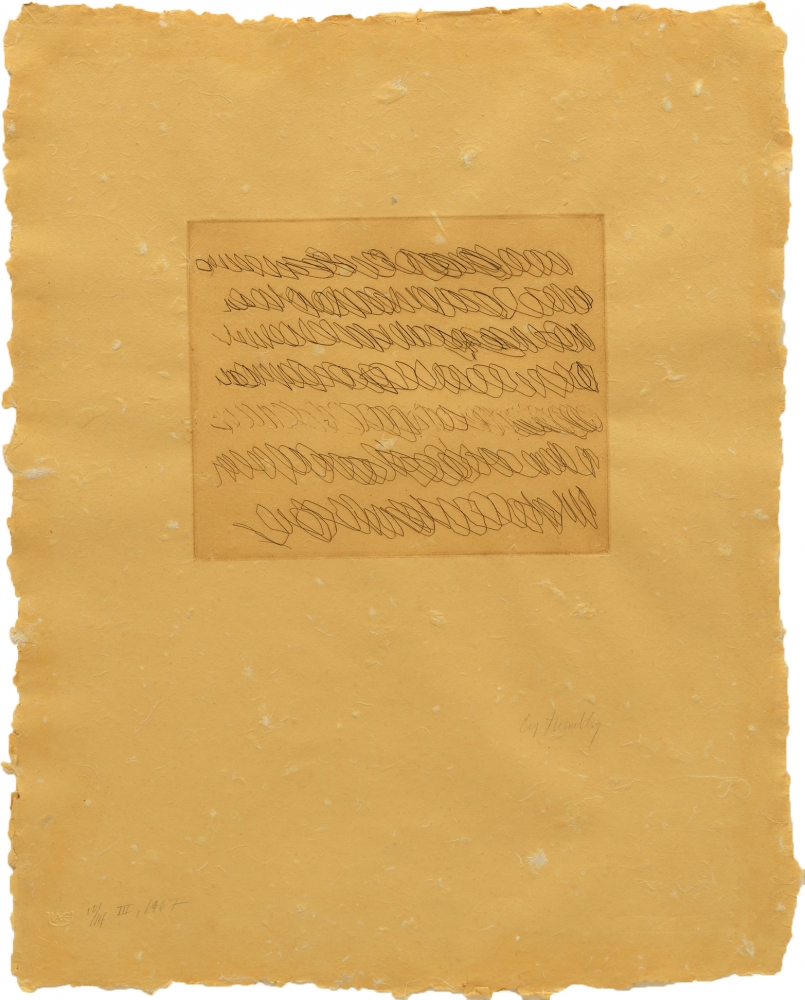 Cy Twombly’s 1967 etching, Note III, presents a poetic meditation on the note and succinctly distills the essence of his larger practice, which frequently alludes to the gestures and forms of writing. Twombly’s curly, awkward scrawls evoke a range of associations, from graffiti to children’s doodles, yet still command the sheet through the assertive regularity of the horizontally ruled composition. The plate’s intimate scale also suggests a relationship to the acts of reading and writing.

Similarly, Barnett Newman’s etching Note I, from the following year, is perhaps his smallest-scaled workand also his first experiment with etching and aquatint. Tatyana Grosman provided him with several 3 x 6 inch copper plates, which he worked at home in the evenings, recording on them his thoughts and feelings as if they were pages in a diary. As Thomas Hess writes in 1971, “After finishing Vir Heroicus Sublimis, Newman said that he ‘felt intoxicated with scale,’ and in reaction, and to test further the range of his vision, he began as series of six very narrow pictures.”

In contrast, one of the more overtly textual works in the exhibition is John Baldessari’s 1970 lithograph, I Will Not Make Any More Boring Art—his first print. Instead of visiting the exhibition for which this work was planned, or printing the edition himself, he sent a handwritten note for reproduction a videotape of himself writing the sentence out repeatedly. 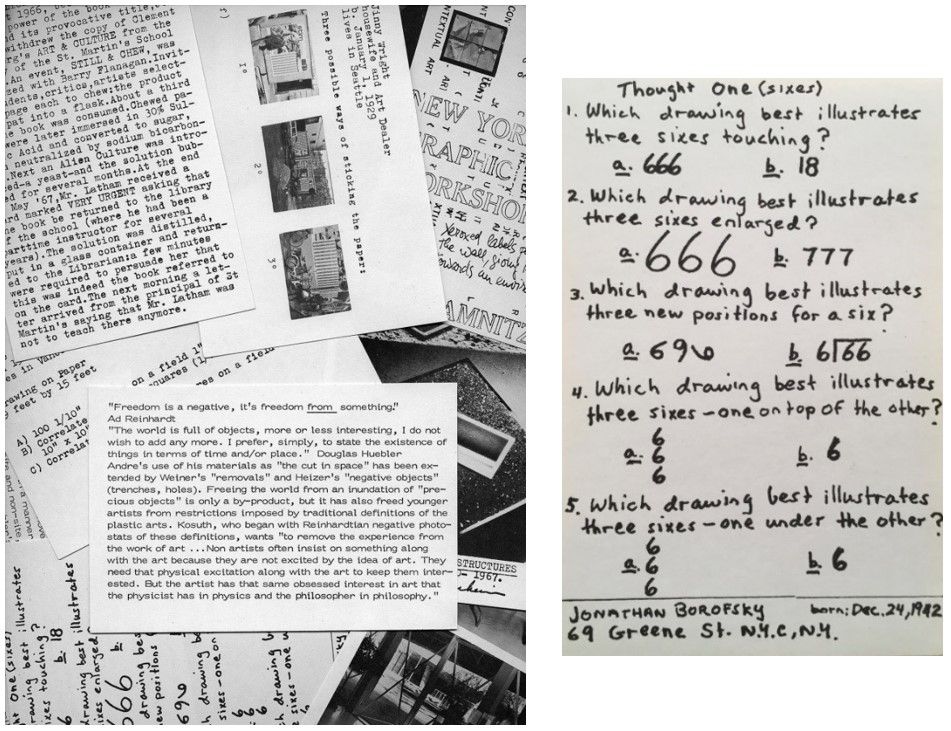 Baldessari's dry and absurd sense of humor is echoed in Jonathan Borofksy’s early work, Sixes, 1967, which was included in Lucy Lippard’s first “Numbers Shows” at the Seattle Art Museum Pavilion in 1969. Lippard issued a questionnaire to each participating artist to be completed on an enclosed notecard, which would constitute their contribution to the catalogue. Borofsky’s notecard also became the literal basis for his submitted artwork, which he enlarged on canvas with black marker. This work is a humorous meditation on the Devil’s number (“666”), which is ironic in the context of Borofsky’s remark that, “…numbers are like God. They connect us all together in a way nothing else does. Like magic.”

Around the same time, Mel Bochner’s pioneering work was also pushing the boundaries of both Minimalism and Conceptual Art. His Misunderstandings (A Theory of Photography), 1970, reproduces supposed statements by famous artists and theorists printed on index cards, mimicking the scale and appearance of handwritten notes. Included among the cards is a photographic negative of Bochner’s arm set against a 12-inch annotation, reprising an earlier image from his Measurement series: Actual Size (Hand), 1968.

Sylvia Plimack Mangold channels a similar interest in measurement through one of her classic trompe l’oeil floorboard and ruler works from 1975. The title of the drawing itself sets the stage for a contradiction: A 12” Rule not diminished, the length of an 18” Rule if it were. While her system of realistic representation appears rational, we soon discover that although the rulers match point-by-point to measurable reality, they ultimately contradict the perspectival logic of the depicted space. This exquisite drawing was intended to be, in Plimack Mangold’s words, “diagramming how one’s perspective determines perception.”

Other artists in the exhibition extend this interest in marking space to marking time. In the late-1960s, Joel Shapiro made a series of drawings using his fingerprints as a repeating mark, which were, in his words, “about marking time and trying to relinquish a certain amount of responsibility for the finished image.” A year later, Shapiro extended this sensibility from drawing to sculpture with a work consisting of sixteen porcelain units. While one of these approximates a sphere, the remainder were dropped from a standard height, each element an increased number of times, from one to fifteen. About this work, art historian Richard Shiff writes, “Because each drop deforms the geometric integrity of the ball, the artist’s arithmetic count supersedes the geometric order, introducing ever greater irregularity with each repetition…He recorded it by imprinting the corresponding digits on each form, as if to impose order on chaos, but only nominally.”

Like Shapiro, Robert Morris’s process-based works similarly skirt conceptual edge of order and chaos. His Blind Time drawings start with an “assignment” the artist imposed on himself, in this case, making a drawing without seeing. Each drawing is based on a precise set of instructions, which constitute the conceptual premise of the work and which Morris carefully inscribes afterward on the same sheet. 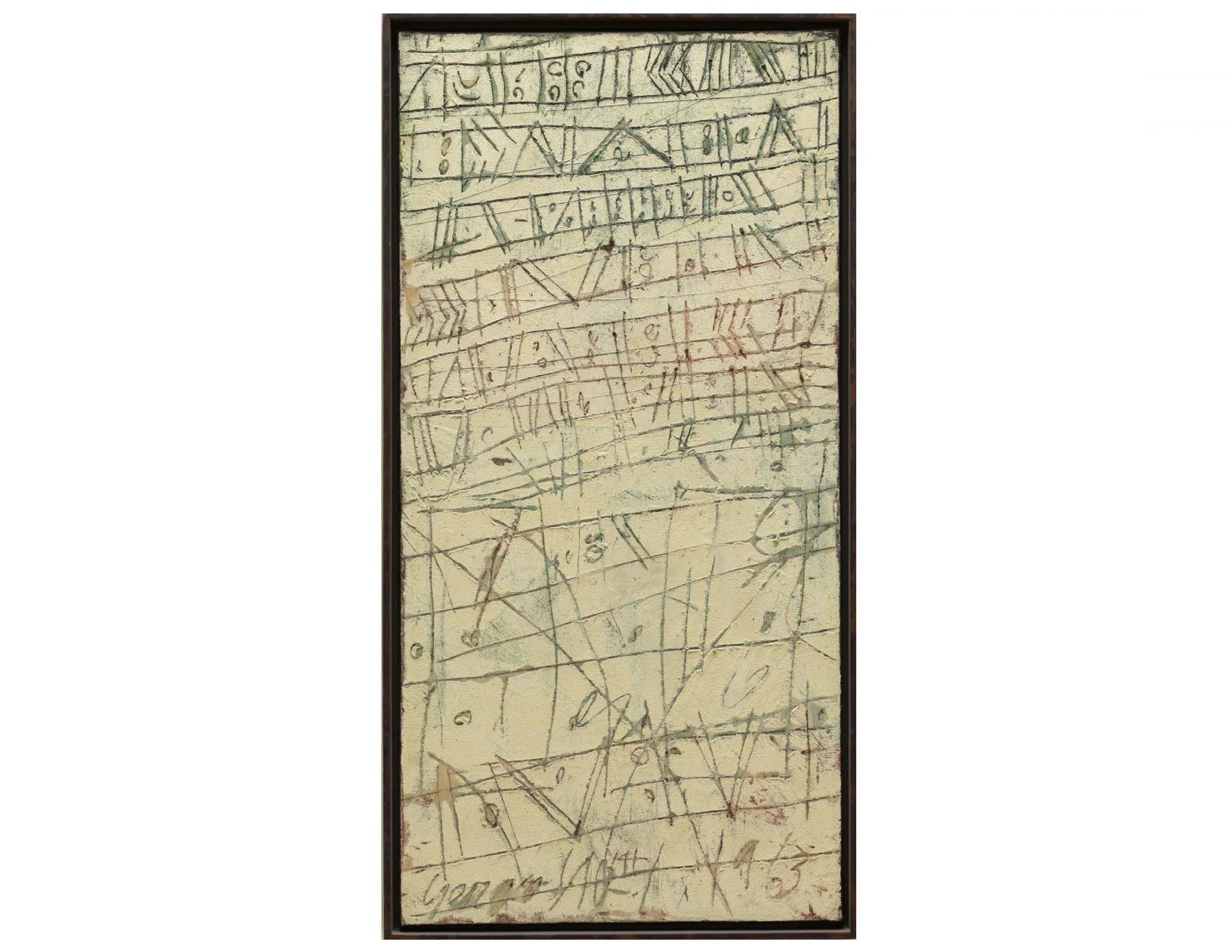 French painter Georges Noël also delights in mimicking the palpably physical actions and formats of writing. Central to his artistic practice, and perfectly conveyed in his 1963 painting Alignement Vertical, is the notion of the palimpsest, a written document which has been rubbed down and reused, layering text with erasure. According to art historian and curator Margit Rowell, “To Georges’s mind, his ‘palimpsests’ expressed layers of sensibility, emotion, energy, and memories. Although Georges was not interested in Surrealism, he was intrigued by the notion of ‘automatic writing,’ as a kind of graphic expression that comes, unadulterated, with, in his case, its own symbols and signs, from the core of the artist’s being.”

American artist Edda Renouf is known for altering the surfaces of canvas or paper before applying coloration, and in the case of High Frequency Drawing #6, 1977, she incised lines directly into the paper surface. For Renouf, these repetitive marks and color combinations served as a form of personal record keeping. Renouf explains, “important and recurrent themes are that of time and music or sound: my art works are a record of the days, weeks, months and seasons when they were created, and thus act as a journal of my working process.”

Some notations seem to signify nothing other than their own making. Eleanore Mikus’s Untitled work from 2012, made of ink on a hand-folded sheet of paper, echoes her earliest painted reliefs and paperfolds from the 1960s. Like many works in this exhibition, this intimately scaled meditation indexes both the iterative, repetitive act of folding as well as mark-making in each of the resulting quadrants.

This is similar to German artist Heinz Mack’s 1958 drawing, Zeichnung mit kleinen Frequenzen (“Drawing with Small Frequencies”), which was completed the year after he co-founded the ZERO group with Otto Piene. This spare work encapsulates his artistic philosophy, which he first articulated around the same time: “…the new structural order of pictorial space will be determined by the space value of color and its frequency. The clarity of relations of pictorial space is determined by the eye alone.” Here, any rule, principle, or concept is subsumed within the literal, repetitive act of making marks on paper. The horizontal dashes, at first seemingly irregular, reveal themselves to be aligned with regularly spaced vertical columns and decrease in frequency, moving from the top of the sheet to the bottom. 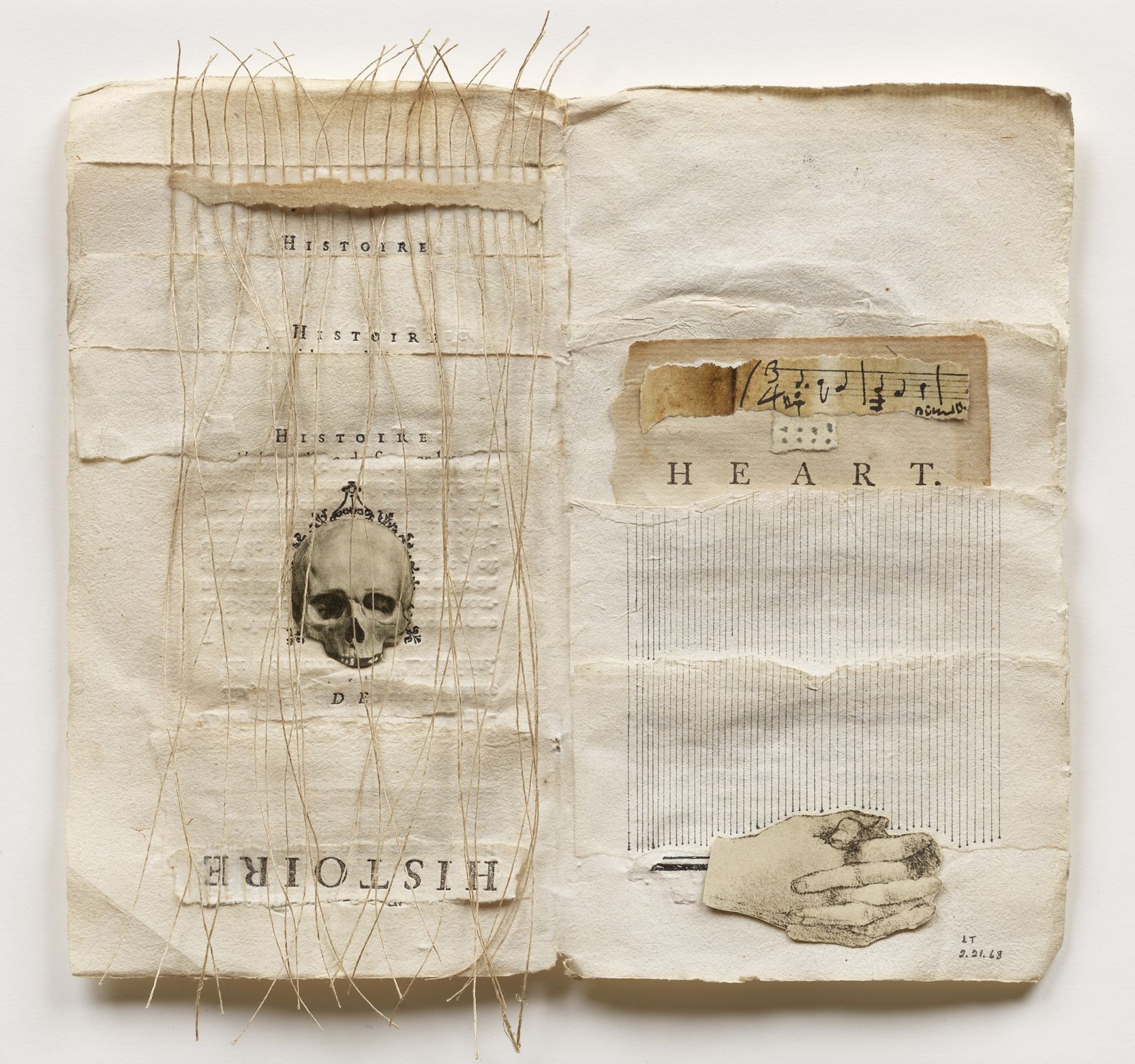 Lenore Tawney, best known for her collages and pioneering fiber art, moved to New York in the late-1950s and became associated with a generation of artists including Ellsworth Kelly and Agnes Martin. In 1964, Tawney began experimenting with collage, often working on pages taken from antique books. Tawney’s 1968 collage Heart strikes a particularly tender note, combining several kinds of marks and notations, the hand-written and drawn alongside printed matter, which fittingly includes a passage of a musical score. A human skull, interspersed with the French word “histoire” repeated multiple times, render this sensitive little collage a meaningful memento mori.

For more information or to schedule an appointment, please contact Gilles Heno-Coe at Gilles@craigstarr.com.